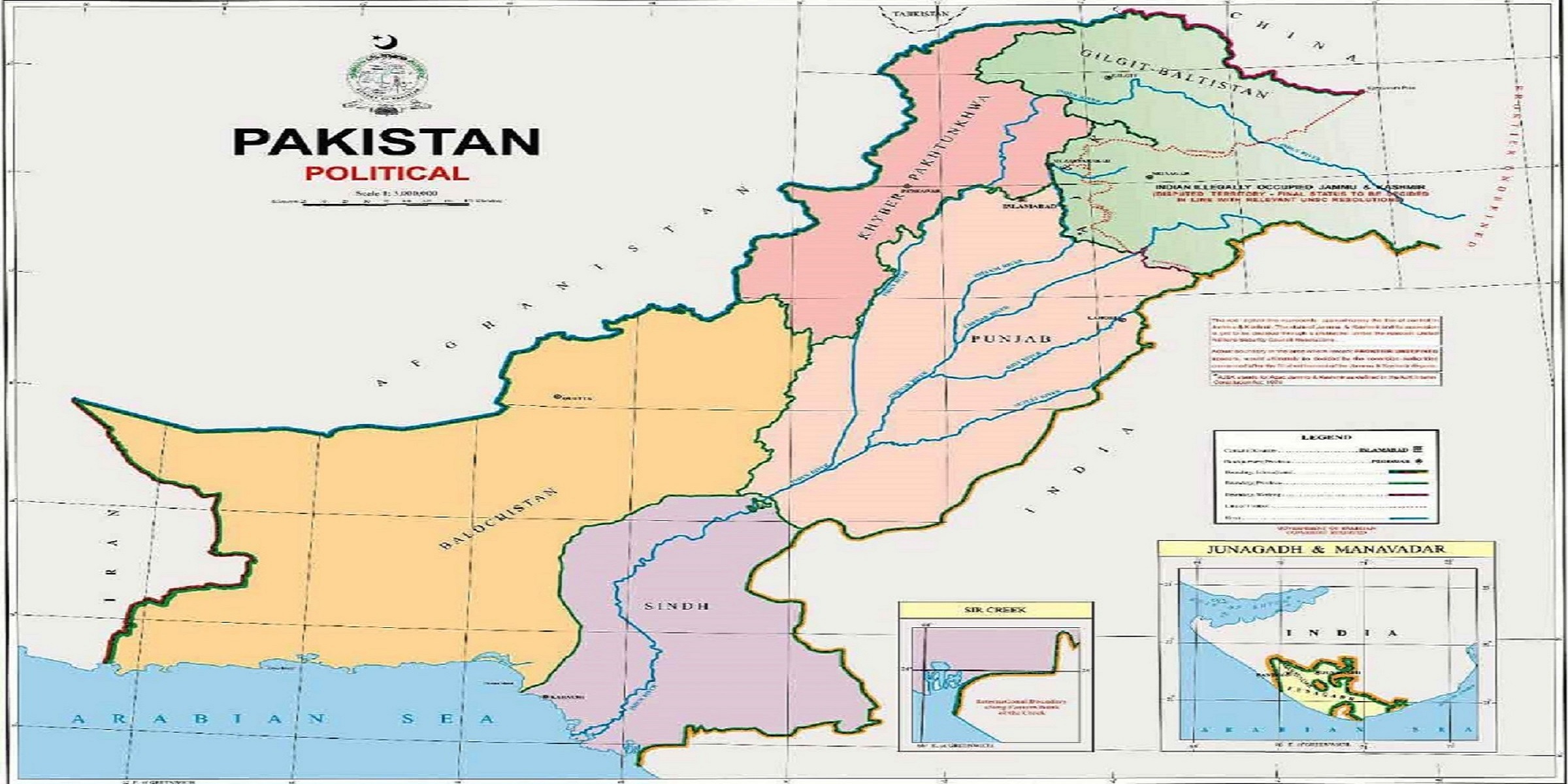 Pakistan emerged on the world map on 14th August 1947. Pakistan is located between 24 and 37 degrees Latitude and between 61 and 75.5 degrees Longitude. It is surrounded by China in the North, Afghanistan, and Iran in the West, and India lies in the East. The Arabian Sea lies to its South with 1000 kilometers long coastlines with captivating beaches. Karakoram Highway along the great Silk Route links Pakistan with China. Afghanistan, Iran, and India are linked with Pakistan by air and road. Pakistan's capital city is Islamabad. Pakistan has four provinces, Punjab, Sindh, Northwest Frontier Province (NWFP), and Balochistan. Their respective capitals are Lahore, Karachi, Peshawar, and Quetta. In addition to the province, there are the Federal Administered Northern Areas, which comprises districts of Diamer, Ghanche, Ghizar, Gilgit, and Skardu. Further, there are more than seven Federally Administered Tribal Areas. The total area of Pakistan is 796095 sq.km. Where its population is 140 million (approximately). The Major Cities of Pakistan are Karachi, Hyderabad, Lahore, Faisalabad, Multan, Sialkot, Rawalpindi, Peshawar, and Quetta. The National language is Urdu, whereas English is used as an official language. Other main languages are Punjabi, Pushto, Sindhi, and Balochi. Nature has blessed Pakistan with a unique landscape. The scenery changes northward from coastal beaches, lagoons, and mangrove swamps to sandy deserts, desolate plateaus, fertile plains, dissected uplands, and high mountains with lush green valleys, quiet lakes, snow-covered peaks, and eternal glaciers.

The Northern Areas of Pakistan are unsurpassable in natural beauty, peaceful and magnificent, takes the breath of all who fall under its spell. The mighty ranges, Karakoram, the Himalayas and the Hindukush collide here. Found in these lofty ranges are the mountains of awesome heights, lush green valleys, quiet lakes of crystal clear blue water, through which flow murmuring streams and springs, and thundering rivers, above all the lion river mighty Indus. The K-2, of all the world's mountains second only to Everest, shreds the jet stream at 8611 meters. At its base stretches another wonder of the world, Concordia, a rippling, rutted, blemished river of ice, where the great glaciers slide and slither together before separating to go their different ways, Concordia is part of the main stage of a natural amphitheater that has no equal. Within the borders of Northern Areas of Pakistan, which hold five of the world's fourteen highest mountains, those over 8000 meters (26250 feet) and more than sixty higher than 7000 meters (23000 feet). In the valleys, the eye never pans. Always it is climbing. Besides high mountains, the Siachen, Baltoro, and other glaciers of the Karakoram are the largest and longest in the world outside the polar region. From its spectacular birthplace in Concordia, at the base of K-2 and Gasherbrum Range, the Baltoro Glacier flows for more than fifty-nine Kilometers, while the Batura Glacier to the north hanging over the Karakoram Highway, streams down from the north most ramparts of the Hindukush, flowing for almost sixty-five kilometers, and the Siachen Glacier off K-2 runs for more than seventy kilometers. These mountain ranges have divided the area into beautiful and most diverse scenic valleys like Skardu, Khaplu, Shigar, Hunza, Gilgit, Chilas, Naltar, Shamshial, Astore, Ishkuman, and Chitral. These valleys are further divided into smaller ones with breathtaking scenic views. These areas are most suitable for Mountaineering, Trekking, Walking, Jeep Safaris, Mountain Biking, and for those who dare take up the challenges of the frothy white water of the roaring mountain rivers in the area know the excitement and thrill that such sports offer. You could spend some days in the peace of mind and away from it all. Pakistan truly takes pride in its 5000 years history, which goes back even further into the historical past yet untraced. Pakistan is the known heir to one of the most ancient civilizations of the east, the Indus valley civilization, traces of which are found in the ruins of Moen-jo-Daro, Amri, Kot Diji, and up in the plains of Punjab, the remains of Harappa. The transition from rural past to urban life in the Indus valley was so sudden that outside influence looks very probable. It appears that merchants of Mesopotamia who traded with settlements on the coast of the Persian Gulf made deeper voyages and penetrated into the Indus to find new trading partners, bringing with them their way of life. Later day evidence of organized civil life and thriving cities are born by the ruins of Taxila in the Haro valley, some thirty kilometers west of Islamabad. The famed Gandhara Civilization flourished in the lush green valley of Peshawar and the enchanting Swat. The wealth of historical and cultural treasures, colorful landscape spread over the warm beaches to deserts and fertile plains, and the dissected upland and high mountain ranges in the world with beautiful valleys, snow-covered peaks, and eternal glaciers have enriched Pakistan as a natural destination for tourists with varied interest. You maybe like to know more about the treasures of the historical sites, enjoy the local traditions and hospitality, or the folklores and dances, mountaineering and trekking, all can be found in one country, Pakistan. Welcome to your destination.