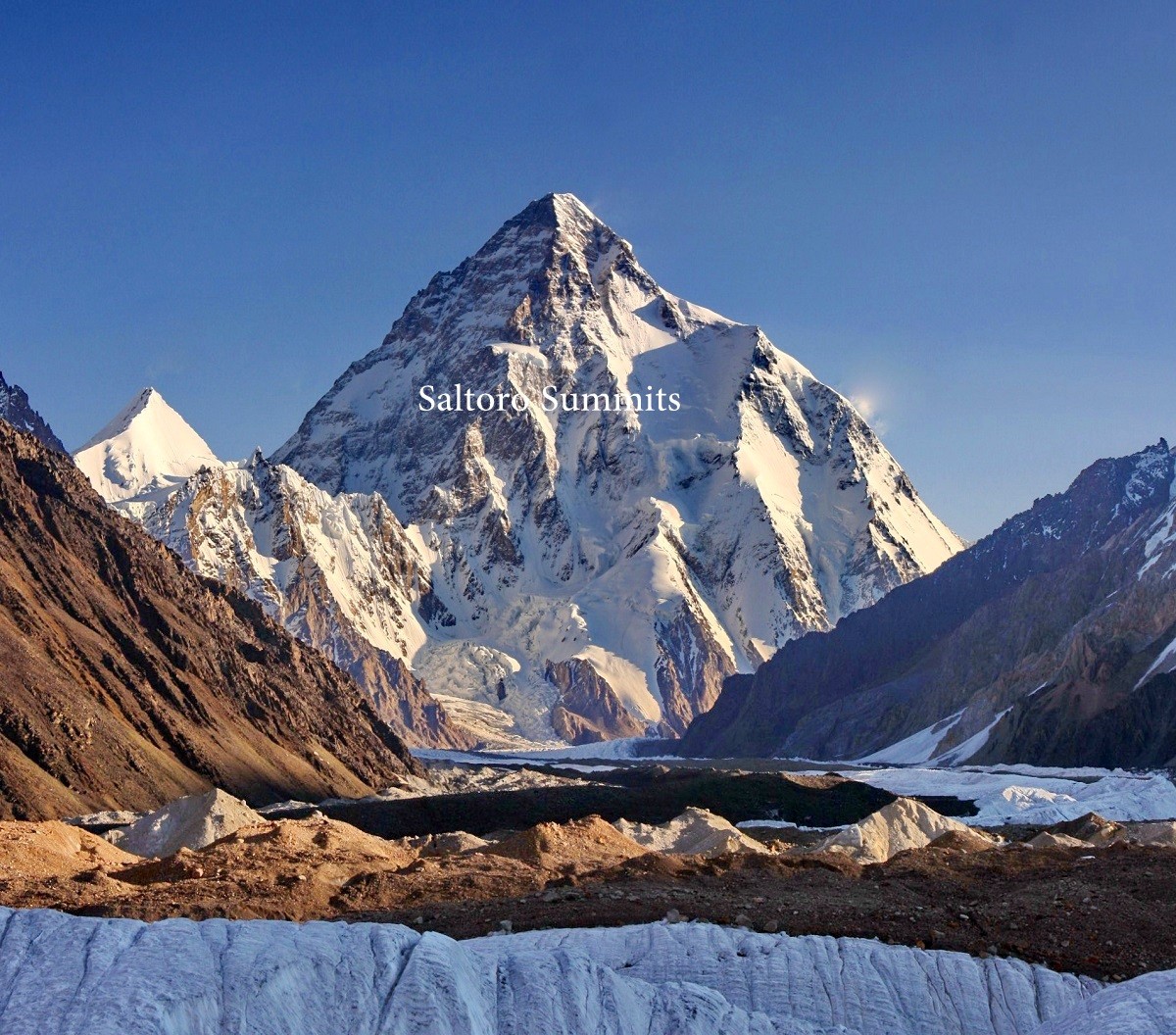 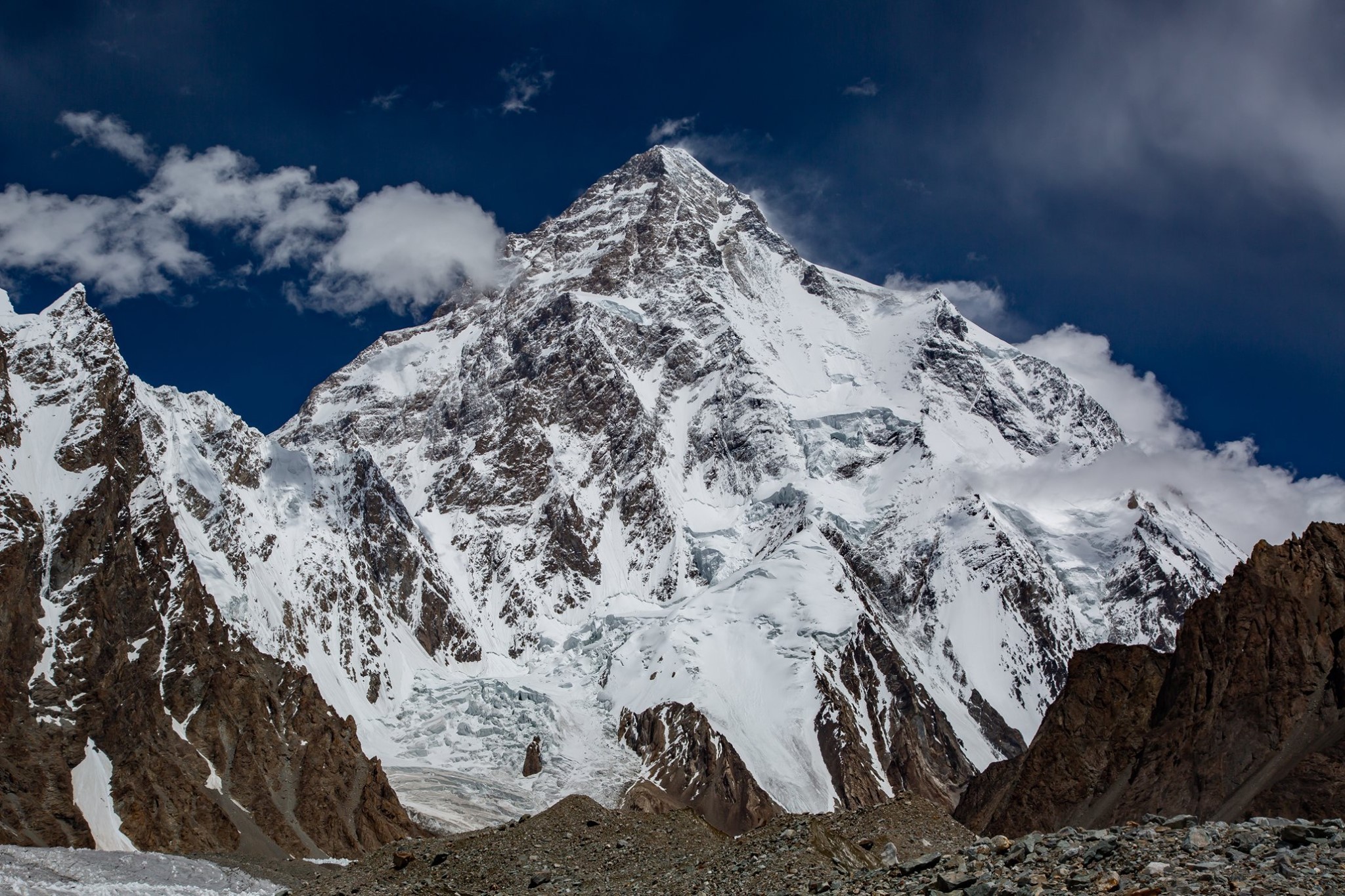 K2 8611-M is the second highest peak in the world and the highest peak in Pakistan. K2 also known as CHOGORI which in Balti language means the king of mountains.K2 has variously be described as "awesome", " Killer " and "Savage Mountain. This is because of the massiveness of its size and unsuccessful attempts made on it by various expedition parties.K2 is a rocky mountain up to 6000-M, beyond which it becomes an ocean of snow. K2 8611-M is situated on the Pakistan China border in the mighty Karakorams. The traditional route to its base camp goes from Skardu Baltistan which is linked with Islamabad by Karakoram Highway as well as by air. From Skardu, the route goes via Shigar-Dassu-Askole up to Concordia over the Baltoro Glacier. It was in 1856, when the British were enforcing their control over India provoking the 1857 war of Independence, that a young Lieutenant of the Royal Engineers, T.G.Montgomerie, was quietly busy in surveying the mountains of Kashmir he saw this tallest mountain towards the Karakoram and named it K2. The name K2 however still stands. In 1860 Captain Henry Haversham Godwin Austen of the Survey of India went to the Baltistan area and surveyed the famous Shigar and Saltoro valleys. He was considered as one of the greatest mountaineer of day, had great power of endurance and was immensely brave. It is a myth that the K2 peak which is erroneously called Godwin- Austen peak was discovered by him. It is, however, a fact that he explored the gateway to K2 i-e Baltoro Glacier along with famous glaciers including Godwin Austen glacier. It was probably for the first time in 1902 that an organized expedition of Oscar J.L Eckenstein traveled to K2 from Baltoro glacier. The expedition was without any guide. Its aim was to explore approaches to the mountain and possibly have a try on the peak. The party collected useful information about the upper Godwin Austen glacier which was used as a stepping stone by an expedition in later years. Two members of the expedition one Swiss Dr.Jules Jacot-Guillarmot and other an Austrian by the name of Dr. V.Wesseley succeeded in reaching 6523-M on the northeastern ridge of K2. In 1909 a big Italian expedition under the leadership of resolute Luigi Amadeo Giuseppe (Duke of Abruzzi) the grandson of King Victor Emmanuel II of Italy, reconnoitred K2 peak. Its members produced a very good account of the expedition with photographs and accurate maps of the Baltoro area. Two famous British mountaineers Harold William Tilman and Eric Earle Shipton explored and surveyed the north face of K2 and its subsidiary glaciers in 1937. In 1938 the American Alpine Club sponsored a reconnaissance party for a visit to the K2 area. The party reached a height of 7925-M after setting up eight camps. Famous American mountaineers like Dr. Charles Houston and Robert Bates were in this party. Next year another American expedition tried to climb K2 led by Fritz Hermann Ernst Wiessner a German- American chemist and mountaineer. The expedition along with Nine Sherpas made very good progress on the already identified southeast ridge. Wiessner along with one sherpa went up to approximately 8382-M. In this expedition, Wolfe and three sherpas died on K2. Another American expedition attempt on the K2 8611-M was made in 1953. The expedition leader was Dr. Charles Houstton who had also led the 1938 American expedition on this peak. Dr.Houston's medical professor noted for his contribution to research on the effects of high altitude on the human body and diseases originating from such effects. One Pakistani Late Colonel Mr.Ataullah also accompanied the party. In 1954 an Italian expedition came to Pakistan to try its luck on K2. It consisted of twelve climber and four scientists and was led by veteran mountaineer Professor Ardito Desio, who had come to these mountains with Italian expeditions before the World war II. This expedition made very good progress and set up camp II. It was at this camp that one of its members Mario Puchoz a 36-year-old guide died of pneumonia on the 21st of June 1954. The party established six more camps on the southeast ridge Camp IX was bivouac. On the 31st July Lino Lacedelli and Achille Compagononi started from the bivouac. They exhausted their oxygen supply 500 feet short of the summit but could not resist the temptation to be the first to climb the mighty K2 peak. They, therefore, continued their assault and reached the summit at six in the evening. After staying for a while they started descending and reached Camp VIII round about eleven at night. In this way, the saga of K2 ended.

1
Day 1 : Arrival Islamabad
Arrival Islamabad International Airport and transfer to Hotel.
2
Day 2 : ALPINE CLUB OF PAKISTAN
Briefing at Alpine Club of Pakistan. Overnight in Hotel.
3
Day 3 : ISLAMABAD TO CHILAS
Islamabad to Chilas via Babusar Top, Kaghan Valley, Overnight in Chilas.
4
Day 4 : CHILAS TO SKARDU
Arrival in Skardu. Overnight in the Hotel.
5
Day 5 : SKARDU
Final arrangement for the expedition. Overnight in the Hotel.
6
Day 6 : SKARDU TO ASKOLE
Early morning drive to Askole, Overnight in tent
7
Day 7 : AKOLE TO JHULA
Trek to Jhula, Overnight in tents.
8
Day 8 : Day 8: JHULA TO PAIYU
Trek to Paiyu, overnight in tents
9
Day 9 : Day 9: PAIYU- REST DAY
Rest day at Paiyu, Overnight in tents
10
Day 10 : PAIYU TO URDUKAS
Trek to Urdukas. Overnight in tent.
11
Day 11 : URDUKAS TO GORO II
Trek to Goro II, in the evening overnight in a tent.
12
Day 12 : GORO TO CONCORDIA
Trek on the Baltoro Glacier to Concordia. The climax of the Trek is the spectacular conjunction of the Godwin-Austin and Baltoro Glaciers called Concordia, lying at the heart of the most heavily glaciated region outside the Polar areas within a radius of 19 km stand 41 peaks over 6500 meters. including 04 peaks above 8000 M., This is the center of the densest concentration of the lofty peaks on Earth. Overnight in tents. Walk: 05 - 06 hrs Grade: strenuous Altitude: 4720 M
13
Day 13 : CONCORDIA TO K2 BASE CAMP
After an early breakfast trek to K2 Base Camp. Overnight in tents at K2 Base Camp. Walk: 05 hrs Grade: strenuous Altitude: 4650 M.
14
Day 14 : REST DAY
The final arrangement of the Expedition. Overnight in tents.
15
Day 15 : CLIMBING DAYS 15 TO 51
Climbing start towards SUMMIT. The length of the Summit period depends on the Weather, Fitness, and Experience of the climber.
52
Day 52 : TREKKING BACK TO ALI CAMP
After an early breakfast back to Ali Camp. Overnight in tents.
53
Day 53 : ALI CAMP -CROSSING GONDOGORO LA - KHUSPANG
To avoid the risk of rockfalls on the descent on the Hushe side, we start very early around 2 am. After an early breakfast, we will wear crampons and harnesses and set off, roped together onto the West Vigne Glacier towards the foot of the Gondogoro-La. After 3-4 hours of steep and strenuous ascent, we reach the top to be rewarded with stunning views of K2, Broad Peak, and the Gasherbrum. Then descend towards to Hushe valley in another territory of Baltistan. Overnight in tents.
54
Day 54 : KHUSPANG -TO- SHAICHO
There is one tricky crevasse section to be crossed just after Khuspang but after that, the remaining glacier crossing is rather simple to the camping site to reach Dalsangpa, meaning 'field of flowers', lives up to its name. The beautiful flowers and fauna of Hushe Valley make you feel fresh and energized. After Laila Peak Base Camp, a nice trek to Shaicho, a very green campsite just by Hushe River. If weather clear you can see Masherbrum Peak from the Hushe side. Walk : 06-07 hrs Grade : Moderate
55
Day 55 : SHAICHO -TO- HUSHE
This is the last day of the trek following Hushe River along the greens. Start your easy trek after an early breakfast down towards beautiful Hushe village. Overnight in tents
56
Day 56 : HUSHEY TO SKARDU
After breakfast drive for a full day ride on a winding jeep trail to Skardu. Upon arrival transfer to the hotel.
57
Day 57 : SKARDU TO ISLAMABAD
Flight to Islamabad, if unable due to bad weather same day drive to Kaghan Valley via Babusar Top. Overnight in the hotel.
58
Day 58 : KAGHAN TO ISLAMABAD
Early morning drive to Islamabad. Overnight in the Hotel.
59
Day 59 : REST DAY
Today is a rest day. Overnight in the hotel.
60
Day 60 : ISLAMABAD - DE BRIEFING - DEPARTURE
De-briefing at Alpine Club of Pakistan Islamabad & Transfer to Islamabad International Aiport for your onward destination. End of our Services. Thank YOU! 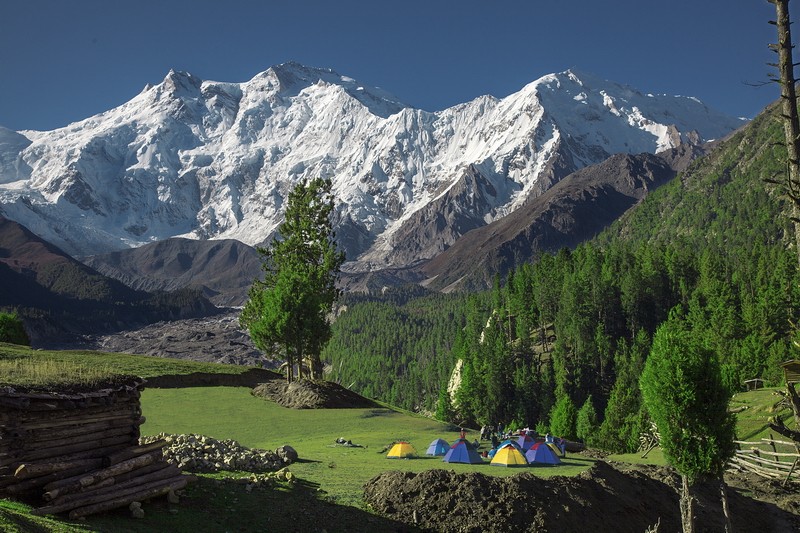 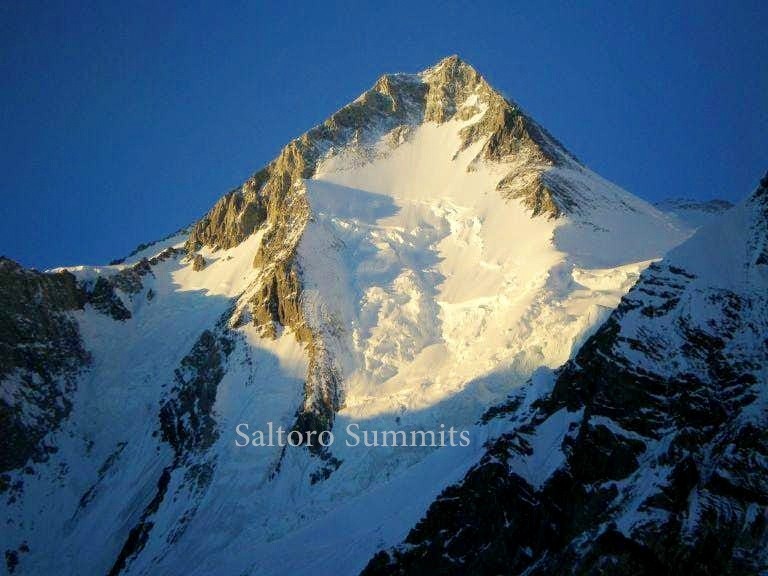 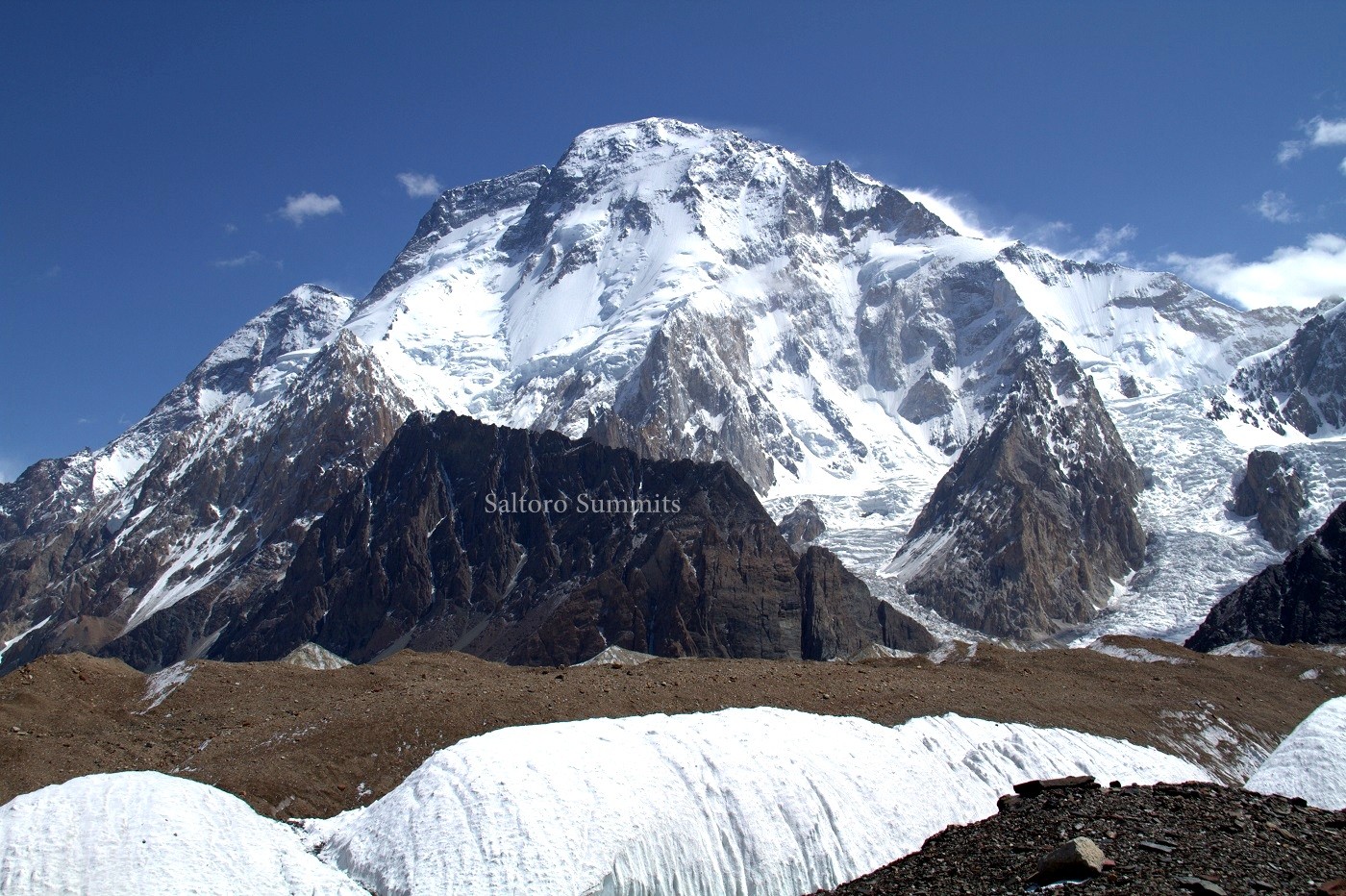